Copper Still Says A Trade Agreement Is On The Horizon

Doctor copper has a long history as a bellwether commodity when it comes to the health and wellbeing of the global economy. We can debate the efficiency of the copper price as a leading indicator, but recently the red metal has been watching and reacting to the ongoing negotiations between the United States and China over trade.

During the 2016 election campaign, President Trump promised that he would level the playing field for trade with the nation with the world’s second leading economy. The Commander-in-Chief pointed his finger directly at China as an abuser of US trade policies. While he did not blame China and expressed his disdain for previous US administrations that allowed the Chinese to take advantage of the US, he pledged to remedy the situation if elected. In 2018, the President began the negotiations by slapping tariffs on China that have weakened their economy which has been a benefit when it comes to the discussions surrounding a new framework for trade that will end the period of protectionism by the US and retaliation by the

Chinese when it comes to US goods.

With the 2020 election season gearing up, President Trump wants to deliver on his promise to level the playing field when it comes to trade with the Chinese. A victory would be a political bonus as he hits the campaign trail in his re-election bid. The copper market has been telling us that success is on the horizon as the price of the red metal has been moving towards the $3 per pound level after trading to a low at under $2.55 at the start of 2019.

BHP Group (BBL) is based in Melbourne, Australia, but the company’s tentacles reach around the globe. BHP is one of the leading natural resources firms in the world and a leading producer of copper as it operates the largest copper mine in Chile and properties around the globe that produce the red metal. A rise in the price of copper above the $3 level would support gains in the price of BBL shares.

The price action in the red metal has been strong

Copper came into 2019 with a whimper as the price dropped to a low at $2.5430 per pound on January 3, the second day of trading of the year. Since then, the price of copper has recovered and traded at the highest level since June 2018 when it was on its way lower on the back of the trade dispute between the US and China.

On the way down, copper broke below multiple levels of technical support, the last being at $2.8750 which was the September 2017 low. In February, the price rose above that level.

As the weekly chart highlights, the price of copper rallied steadily from the early January low through the end of February when the price ran out of steam on the upside at $2.9780 on the nearby COMEX futures contract. After a correction that took copper back to $2.8335 in March, the price moved to a marginally higher high at $2.9885 on April 1. The price of the base metal was trading just below the $2.90 per pound level at the end of last week with price momentum in slightly overbought territory and relative strength at the upper region of a neutral condition. Open interest has been flatlining around the 250,000-contract level since early February as copper has been following the ups and downs of the flow of trade negotiations between the US and China.

At around $2.90 per pound, the copper market remains optimistic that a trade deal is on the horizon.

An analysis of LME and COMEX stockpiles yields a bullish conclusion 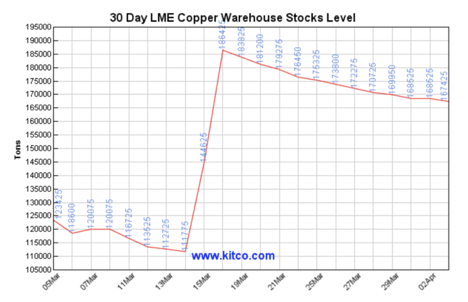 As the chart shows, LME stocks suddenly increased in mid-March to 186,425 tons from the low which likely put some downside pressure on the price of copper which fell to $2.8335 during the week of March 25. However, stocks had been edging lower since the recent high and stood at 167,425 tons as of April 2. On April 4, they rose to 198,325 tons which put some pressure on the price of the red metal at the end of last week.

Meanwhile, stocks of copper in COMEX warehouses moved lower over the past two months. 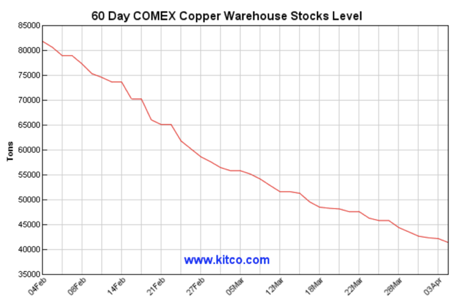 Overall, the current level of copper stockpiles on the two leading exchanges in the world is supportive of the price of the red metal. Declining stocks is a sign of robust demand for the red metal. I will be keeping an eye on the LME stocks next week. If they rise above the 200,000-ton level, we could see further corrective price action.

The monthly chart has shifted to an uptrend

The longer-term monthly copper chart shows that the base metal rose to an overbought condition and remained in overbought territory from mid-2017 through early 2018. Last June, the threat of a strike at the world’s leading copper mine, Escondida in Chile, caused a short-term price spike that took the metal to 0.65 cents under the late 2017 peak at $3.3220 per pound. However, a settlement between the mine’s management BHP and workers combined with the escalating tariffs on

China by the US and Chinese retaliation caused the price to fall like a stone. To just over the $2.50 per pound level in August 2018.

As the monthly chart shows, the price spent around four months consolidating between just over $2.50 and under the $2.8750 technical resistance level when price momentum declined into an oversold condition. Rising optimism over a new framework for trade between the US and China lifted the price of copper over its technical resistance price at $2.8750 and pushed the price to just shy of $3 per pound and price momentum crossed to the upside on the longer-term chart and is now in neutral territory.

China is a massive consumer of the metal

The trade dispute has weighed on China’s economy, but economic growth in the world’s most populous nation was still at over 6.5% in 2018. China continues to grow, and that means that the demand for infrastructure building across the country of 1.4 billion people is rising. At the same time, President Xi rolled out a program to reduce pollution near many Chinese cities which caused a reduction in the smelting and refining of metals. Cutting pollution in China means that import requirements for refined copper are likely rising. A trade deal could propel demand for the red metal even higher over the coming months which is a reason why copper traded to a high at almost $3 per pound.

The monthly chart indicates that the current path of least resistance for the price of copper is higher. A trade agreement between Presidents Trump and Xi could send the price back over the $3 per pound psychological level in copper and set the stage for a higher peak above the $3.3220 resistance level. On April 4, President Trump expressed optimism over a trade deal. He told markets that negotiators need another four weeks to settle the many issues but added that the two sides had already agreed on many of the most challenging factors. Intellectual property and the future of tariffs continue to be sticking points for a final deal. Therefore, we are likely to see a continuation of volatility in the copper market over the coming month with support at over $2.80 and resistance at the $3 per pound level on the nearby COMEX futures contract.

BHP Group is one of the leading producers in the world

BHP Group is a multinational commodity producing company with a large footprint in the copper market. Aside from their interest in the world’s leading copper producing mine in Chile, they own and operate many other properties around the globe. The company profile for BHP Group states:

BHP Group discovers, acquires, develops, and markets natural resources worldwide. The company engages in the exploration, development, and production of oil and gas properties; and mining of copper, silver, lead, zinc, molybdenum, uranium, gold, and iron ores, as well as metallurgical and energy coal. It also engages in the mining, smelting, and refining of nickel; provision of freight, finance, and administrative services, as well as trading, marketing, and support services; and potash development activities. BHP Group is headquartered in Melbourne, Australia. (Source: Yahoo Finance)

BHP Group has net assets of $204.997 billion, trades at a price to earnings multiple of 24.53 times earnings and pays a dividend of 4.41%. Over 1.5 million BBL shares change hands on average each day. 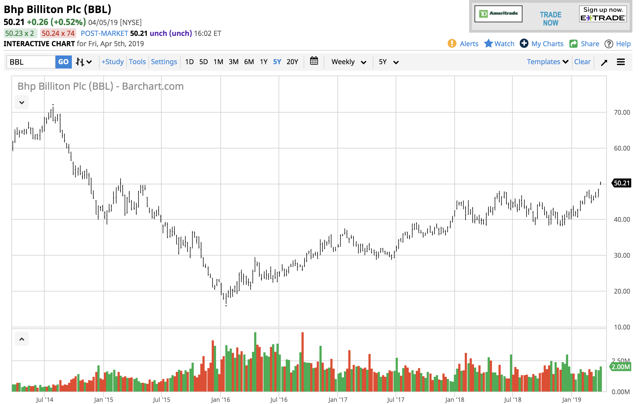 As the chart shows, BBL shares are correlated with the price of copper which is one of the leading products for the company. BBL has rallied steadily since early 2016 when copper fell to a low at $1.9355 per pound. Last May the shares traded at a peak at $47.92, but the issues at Escondida and the weak stock market in Q4 2018 caused a correction to a low at $38.04 in late 2018. Since then, the shares have been moving higher reaching their most recent peak at $50.59 per share last week and they closed at over the $50 level.

There is an excellent description of the difference between BBL and BHP shares via this link. The piece opines that “It is almost always better for Americans investing through retirement accounts to buy into BBL rather than BHP. As a significant producer of copper, both BBL and BHP are likely to move higher or lower with the price of the red metal over the coming weeks. As a barometer of the state of trade negotiations between the US and China, the company is likely to act as an excellent proxy for the price of the red metal which could move back above $3 per pound in the event of a trade agreement that ends the current era of protectionism.

The Hecht Commodity Report is one of the most comprehensive commodities reports available today from the #2 ranked author in both commodities and precious metals. My weekly report covers the market movements of 20 different commodities and provides bullish, bearish and neutral calls; directional trading recommendations, and actionable ideas for traders. I just reworked the report to make it very actionable!

Disclosure: I/we have no positions in any stocks mentioned, and no plans to initiate any positions within the next 72 hours. I wrote this article myself, and it expresses my own opinions. I am not receiving compensation for it (other than from Seeking Alpha). I have no business relationship with any company whose stock is mentioned in this article.

Additional disclosure: The author always has positions in commodities markets in futures, options, ETF/ETN products, and commodity equities. These long and short positions tend to change on an intraday basis.

This entry was posted in Uncategorized. Bookmark the permalink.